Q1. When consumers discard their gasoline-powered automobiles for electric-powered ones, this partially reflects the ________ of gasoline.

Q3. In the area of many college campuses, parking spaces are often scarce. If these parking spaces have parking meters, which population described below would pay for parking?

Q4. Kelly is an architect, and she is trying to decide whether to hire Lawrence, a draftsman, to assist with her work. Kelly could hire Lawrence at $20 per hour, but it would take him three times as long to complete a task as it takes Kelly. Kelly is able to earn $90 per hour and has more architectural jobs than she is able to handle. Which of the following is true?

Q5. Nicole asked her neighbor to rake the leaves on his lawn because they were blowing into her yard. It takes an hour to rake the yard, regardless of who performs the task. He responded that it wouldn’t be rational for him to do so, but he would be willing to hire someone else to rake. Why would this be the case?

Q6. When Lucy chose a major, she likely thought about her skills. Let’s say Lucy doesn’t enjoy dealing with numbers. How could she explain to her parents, using logic from economics, why she chose to major in English instead of mathematics?

Q7. The government has been considering doing away with minting pennies because they are rarely used for purchases (with most people collecting them or throwing them away). How would an economist best explain this consumer behavior?

Q8. Comparative advantage emerges because of the presence of

Q9. A recession has crippled the national economy, producing a high rate of unemployment. Which of the following would be a microeconomic decision?

Q10. Why do incentives matter to economists?

Q11. Shoppers at supermarkets often abandon their empty shopping carts at various locations in the parking lot, despite the risk of damage to vehicles or the additional labor cost of retrieving those carts. How might an economist explain this behavior?

Q12. If specialization and outsourcing can harm domestic workers, why do countries still engage in trade?

Q13. Wages are higher in Country X than in Country Y. If the countries decide to trade, then who will benefit?

Q14. The scientific method and the tools of economics are useful in examining

Q15. When testing a model rocket on a campus quad, which of the following would be an endogenous factor?

Q16. A society that is producing its maximum combination of goods and using all available resources for production

Q17. Refer to the accompanying figure to answer the following questions.

How is opportunity cost illustrated?

Q19. Mikhail and Stefan are both artists who can create sculptures or paintings each day. The following table describes their maximum outputs per day. Use this table to answer the following questions.

Based on the table, does Mikhail or Stefan have an absolute advantage? 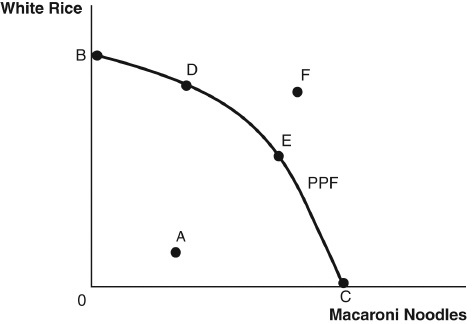 What is the most preferred consumption point for a carbohydrate-loving society?