Q1. Tempo Company’s fixed budget (based on sales of 14,000 units) for the first quarter of calendar year 2017 reveals the following. 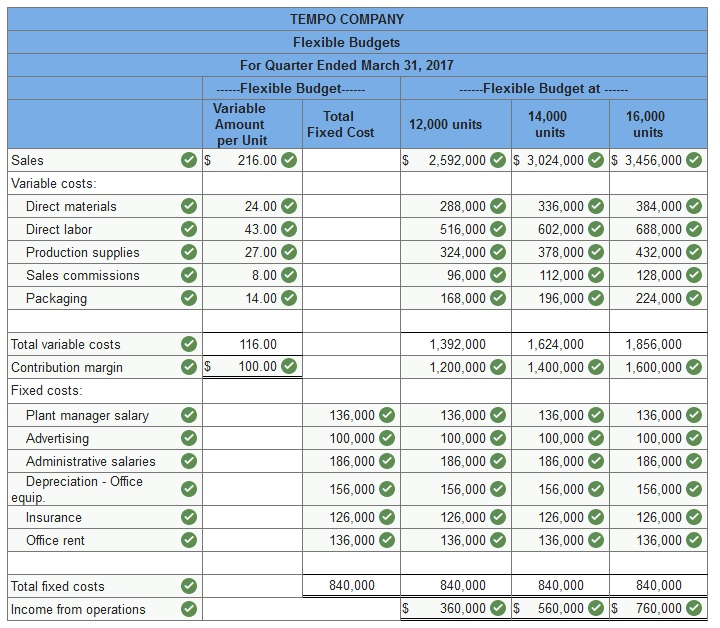 (1) Compute the direct materials price and quantity variances incurred in manufacturing these bookshelves.

The following information describes production activities of Mercer Manufacturing for the year.

Budgeted standards for each unit produced are 0.50 pounds of direct material at $6.00 per pound and 10 minutes of direct labor at $22.00 per hour.

(2) Compute the direct labor rate and efficiency variances. Indicate whether each variance is favorable or unfavorable.

Q2. Use the following data to find the total direct labor cost variance if the company produced 3,500 units during the period.

Q3. The following information relating to a company’s overhead costs is available.

Based on this information, the total variable overhead variance is:

Q5. A flexible budget performance report compares the differences between:

Q6. Fletcher Company collected the following data regarding production of one of its products. Compute the standard quantity allowed for the actual output.

Q7. Claremont Company specializes in selling refurbished copiers. During the month, the company sold 180 copiers for total sales of $540,000. The budget for the month was to sell 175 copiers at an average price of $3,200. The sales price variance for the month was:

Q10. When recording the journal entry for labor, the Work in Process Inventory account is