Q1. Farrow Co. expects to sell 400,000 units of its product in the next period with the following results.

Calculate the combined total net income if the company accepts the offer to sell additional units at the reduced price of $12 per unit. 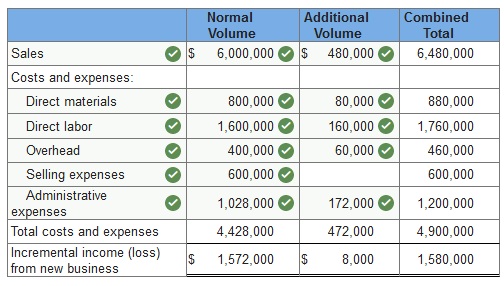 Should the company accept or reject the offer?

1. Prepare an analysis that shows whether the 20,000 units of Product A should be processed further or not. 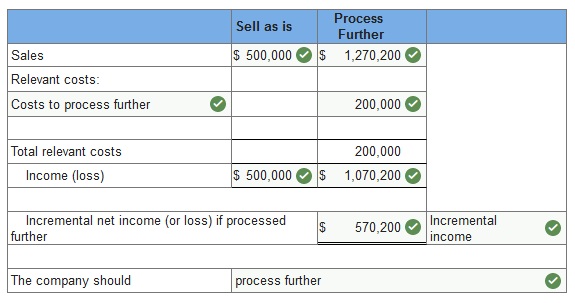 Q4. Xinhong Company is considering replacing one of its manufacturing machines. The machine has a book value of $40,000 and a remaining useful life of 4 years, at which time its salvage value will be zero. It has a current market value of $50,000. Variable manufacturing costs are $33,600 per year for this machine. Information on two alternative replacement machines follows.

Q1. Granfield Company has a piece of manufacturing equipment with a book value of $40,000 and a remaining useful life of four years. At the end of the four years the equipment will have a zero salvage value. The market value of the equipment is currently $22,000. Granfield can purchase a new machine for $120,000 and receive $22,000 in return for trading in its old machine. The new machine will reduce variable manufacturing costs by $19,000 per year over the four-year life of the new machine. The total increase or decrease in net income by replacing the current machine with the new machine (ignoring the time value of money) is:

Q2. Markson Company had the following results of operations for the past year:

A foreign company whose sales will not affect Markson’s market offers to buy 2,000 units at $14 per unit. In addition to variable manufacturing costs, selling these units would increase fixed overhead by $1,600 for the purchase of special tools. Markson’s annual productive capacity is 12,000 units. If Markson accepts this additional business, its profits will:

Q3. What decision rule should be followed when deciding if a business segment should be eliminated?

Q4. A company paid $200,000 ten years ago for a specialized machine that has no salvage value and is being depreciated at the rate of $10,000 per year. The company is considering using the machine in a new project that will have incremental revenues of $28,000 per year and annual cash expenses of $20,000. In analyzing the new project, the $200,000 original cost of the machine is an example of a(n):

Q5. Assume markup percentage equals desired profit divided by total costs. What is the correct calculation to determine the dollar amount of the markup per unit?

Q6. Ahngram Corp. has 1,000 defective units of a product that cost $3 per unit in direct costs and $6.50 per unit in indirect cost when produced last year. The units can be sold as scrap for $4 per unit or reworked at an additional cost of $2.50 and sold at full price of $12. The incremental net income (loss) from the choice of reworking the units would be:

Q7. Bluebird Mfg. has received a special one-time order for 15,000 bird feeders at $3 per unit. Bluebird currently produces and sells 75,000 units at $7.00 each. This level represents 80% of its capacity. These bird feeders would be marketed under the wholesaler’s name and would not affect Bluebird’s sales through its normal channels. Production costs for these units are $3.50 per unit, which includes $2.25 variable cost and $1.25 fixed cost. If Bluebird accepts this additional business, the effect on net income will be:

Q8. Granfield Company is considering eliminating its backpack division, which reported an operating loss for the recent year of $42,000. The division sales for the year were $960,000 and the variable costs were $475,000. The fixed costs of the division were $527,000. If the backpack division is dropped, 40% of the fixed costs allocated to that division could be eliminated. The impact on Granfield’s operating income for eliminating this business segment would be:

Q9. Paxton Company can produce a component of its product that incurs the following costs per unit: direct materials, $10; direct labor, $14, variable overhead $3 and fixed overhead, $8. An outside supplier has offered to sell the product to Paxton for $32. Compute the net incremental cost or savings of buying the component.

Q10. Chang Industries has 2,000 defective units of product that have already cost $14 each to produce. A salvage company will purchase the defective units as they are for $5 each. Chang’s production manager reports that the defects can be corrected for $6 per unit, enabling them to be sold at their regular market price of $21. Chang should: