Q1. An externality arises when a firm or person engages in an activity that affects the wellbeing of a third party, yet neither pays nor receives any compensation for that effect. If the impact on the third party is adverse, it is called a negative externality

The following graph shows the demand and supply curves for a good with this type of externality. The dashed drop lines on the graph reflect the market equilibrium price and quantity for this good. 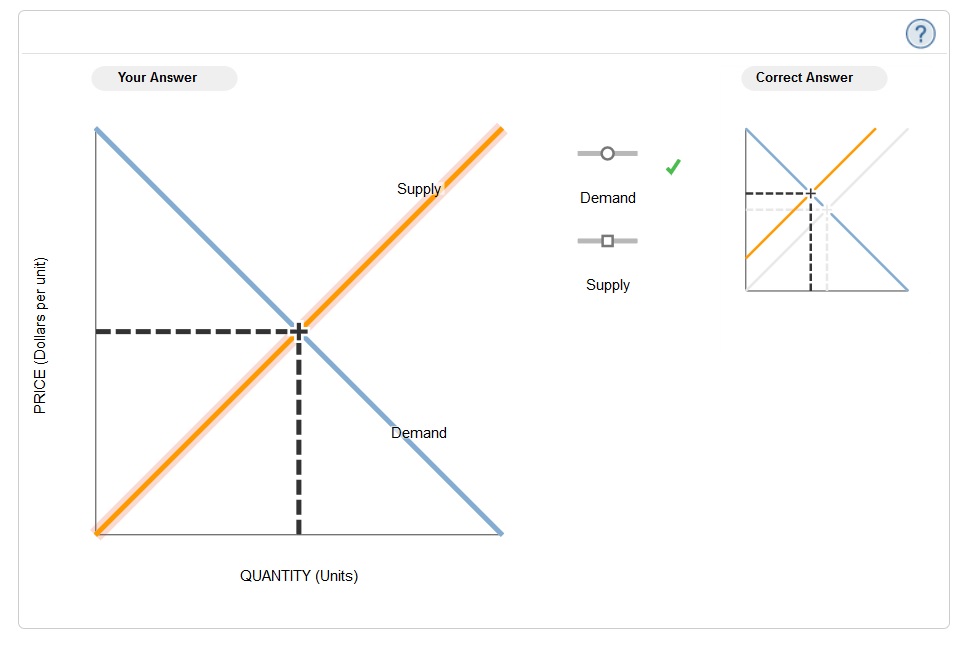 With this type of externality, in the absence of government intervention, the market equilibrium quantity produced will be greater than the socially optimal quantity.

Which of the following generate the type of externality previously described? Check all that apply.

Q2. Parks confer many external benefits on society: open space, trees that reduce pollution, and so on. Therefore, the market equilibrium quantity of parks is not equal to the socially optimal quantity. The following graph shows the demand for parks (their private value), the supply of parks (the private cost of producing them), and the social value of parks, including both the private value and external benefits. 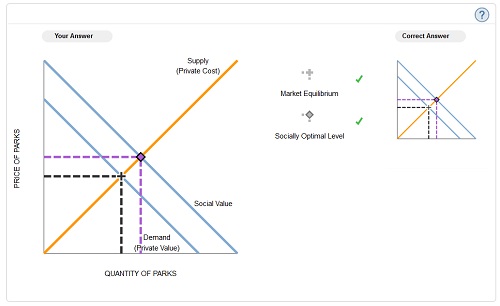 Q3. Consider the market for bolts. Suppose that a hardware factory dumps toxic waste into a nearby river, creating a negative externality for those living downstream from the factory. Producing an additional ton of bolts imposes a constant external cost of $175 per ton. The following graph shows the demand (private value) curve and the supply (private cost) curve for bolts.

Use the purple points (diamond symbol) to plot the social cost curve when the external cost is $175 per ton. 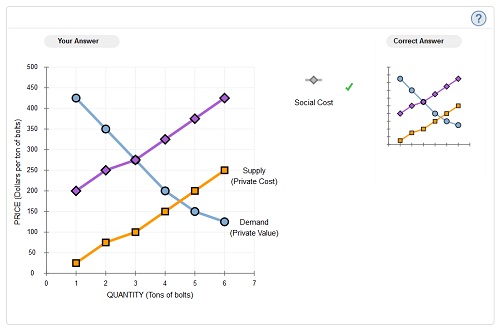 The market equilibrium quantity is 4.5 tons of bolts, but the socially optimal quantity of bolt production is 3 tons.

To create an incentive for the firm to produce the socially optimal quantity of bolts, the government could impose a tax of $175 per ton of bolts.

Q4. Carbon dioxide emissions have been linked to increased air pollution. The following table lists some possible public policies aimed at reducing the amount of carbon dioxide in the air.

For each policy listed, identify whether it is a command-and-control policy (regulation), tradable permit system, corrective subsidy, or corrective tax.

Meanwhile, the other employee proposes using a different strategy to achieve the government’s goal of reducing pollution in the area from 12 units to 6 units. This employee suggests that the government issue two pollution permits to each firm. For each permit a firm has in its possession, it can emit 1 unit of pollution. Firms are free to trade pollution permits with one another (that is, buy and sell them) as long as both firms can agree on a price. For example, if firm X agrees to sell a permit to firm Y at an agreed-upon price, then firm Y would end up with three permits and would need to reduce its pollution by only 1 unit while firm X would end up with only one permit and would have to reduce its pollution by 3 units. Assume the negotiation and exchange of permits are costless.

Because firm Z has high pollution-reduction costs, it thinks it might be better off buying a permit from firm Y and a permit from firm X so that it doesn’t have to reduce its own pollution emissions. At which of the following prices is firm Y willing to sell one of its permits to firm Z, but firm X is not? Check all that apply.

Suppose the the government has set the trading price of a permit at $218 per permit. Complete the following table with the action each firm will take at this permit price, the amount of pollution each firm will eliminate, and the amount it costs each firm to reduce pollution to the necessary level. If a firm is willing to buy two permits, assume that it buys one permit from each of the other firms. (Hint: Do not include the prices paid for permits in the cost of reducing pollution.)

Determine the total cost of eliminating six units of pollution using both methods, and enter the amounts in the following table. (Hint: You might need to get information from previous tasks to complete this table.)

In this case, you can conclude that eliminating pollution is less costly to society when the government distributes tradable permits than when it regulates each firm to eliminate a certain amount of pollution.

Q6. Suppose the Environmental Protection Agency (EPA) wants to mandate that all methane emissions must be reduced to zero in order to alleviate global warming in the United States. Which of the following describes why most economists would disagree with this policy?

Q7. Power stations emit sulfur dioxide as a waste product. This generates a cost to society that is not paid for by the firm; therefore, pollution is a negative externality of power production. Suppose the U.S. government wants to correct this market failure by getting firms to internalize the cost of pollution. To do this, the government can charge firms for pollution rights (the right to emit a given quantity of sulfur dioxide). The following graph shows the daily demand for pollution rights.

Use the graph input tool to help you answer the following questions. You will not be graded on any changes you make to this graph.

Note: Once you enter a value in a white field, the graph and any corresponding amounts in each grey field will change accordingly. 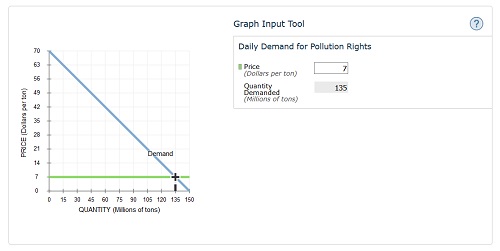 Suppose the government has determined that the socially optimal quantity of sulfur dioxide emissions is 60 million tons per day.

One way governments can charge firms for pollution rights is by imposing a per-unit tax on emissions. A tax (or price in this case) of $42 per ton of sulfur dioxide emitted will achieve the desired level of pollution.

Now suppose the U.S. government does not know the demand curve for pollution and, therefore, cannot determine the optimal tax to achieve the desired level of pollution. Instead, it auctions off tradable pollution permits. Each permit entitles its owner to emit one ton of sulfur dioxide per day. To achieve the socially optimal quantity of pollution, the government auctions off 60 million pollution permits. Given this quantity of permits, the price for each permit in the market for pollution rights will be $42

The previous analysis hinges on the government having good information regarding either the demand for pollution permits or the optimal level of pollution (or both). Given that the appropriate policy (tradable permits or corrective taxes) can depend on the available information and the policy goal, consider the following scenario.

If this is all the information the government has, which solution to reduce pollution is appropriate? Check all that apply.

Q8. Consider a lake found in the village of Sturbridge, and then answer the questions that follow. 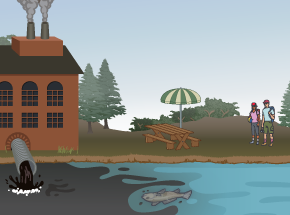 The village has a resort whose visitors use the lake for recreation. The village also has a research lab that dumps industrial waste into the lake. This pollutes the lake and makes it a less desirable vacation destination. That is, the research lab’s waste decreases the resort’s economic profit.

Suppose the resort has the property rights to the lake. That is, the resort has the right to a clean (unpolluted) lake. In this case, assuming the two firms can bargain at no cost, the research lab will use the recycling method and will pay the resort$0 per week

Now, suppose the research lab has the property rights to the lake, including the right to pollute it. In this case, assuming the two firms can bargain at no cost, the research lab will use the recycling method, and the resort will pay the research lab between $300 and $500 per week.

True or False: The research lab will use the recycling method only if the resort has the property rights.

Suppose that a chicken farm uses a nearby stream to dispose of the wastes released by its chickens. These wastes flow downstream into a lake that has become thick with algae and polluted due to the minerals in the waste matter. The local office of a nonprofit environmental organization collects enough donations to stop the farm’s pollution.

Which of the following types of private solutions to the externality of pollution has occurred in this case?

It’s important to note that sometimes private solutions to externalities do not work. For example, this occurs when one party repeatedly holds out for a better deal. This describes the problem of a breakdown in bargaining.